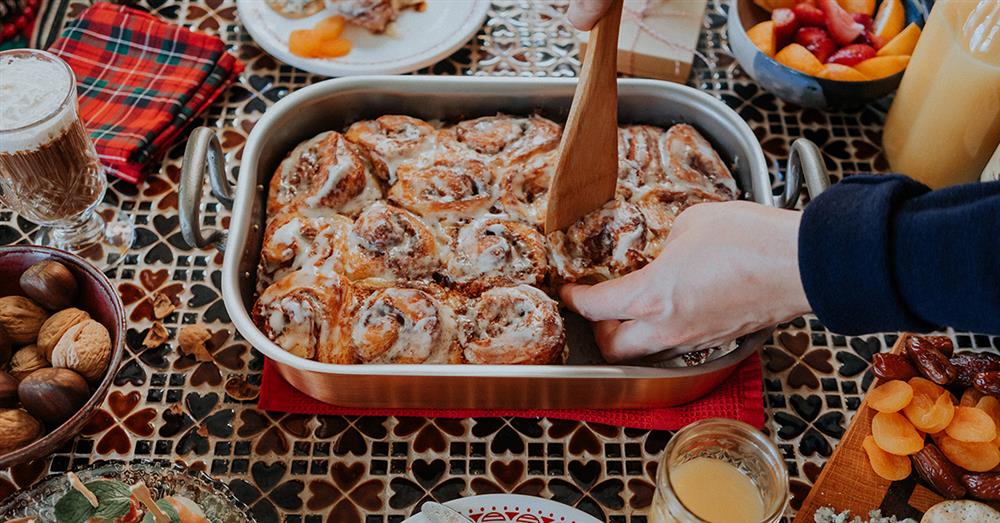 We’re excited to share this unbelievably delicious recipe for Holiday Morning Cinnamon Rolls featuring the Falk 13x9 roasting pan. The dough requires a bit of prep, but then in the morning you just bake, mix up the frosting, and eat way too many toasty warm rolls!

INSTRUCTIONS
DAY 1
1. Line 13x9 Falk roasting pan with parchment paper
2. To make filling, mix butter, sugar, cinnamon, and brown sugar together in a small mixing bowl
3. Set aside to cool and allow to solidify slightly
4. To make the dough, combine 2 cups of the flour with the sugar, salt, and yeast in a large mixing bowl or the bowl to an electric mixer
5. Whisk melted butter with eggs and milk in a small mixing bowl then add to flour mixture
6. Stir until just combined
7. Slowly add the rest of the flour (2 ¼ cups) while kneading the dough by hand (8-10 minutes) or in an electric mixer on low (about 4-5 minutes) with dough hook attached
8. If using an electric mixer stop occasionally to scrape down the sides, once all of the flour has been added kick the mixer up to fully form
9. If dough seems too wet and sticks to the sides add ¼ cup flour at a time
10. Work dough by hands until smooth
11. Let dough proof in a large mixing bowl coated with oil. Roll the dough around in the oil to coat the sides of the bowl. Cover with plastic wrap for 1-1 ½ hours until it doubles in size
12. Roll dough on floured surface into a 10x20 inch rectangle
13. Spread filling mixture evenly over rolled out dough
14. Roll from longest sides so dough forms a tube with filling inside
15. Pinch edge to seal
16. Cut roll into 1 ½ inch slices
17. Lay rounds cut side up in straight lines on bottom of roasting pan
18. Cover with plastic wrap and refrigerate overnight

DAY 2
1. Preheat oven to 450° Fahrenheit
2. Remove roasting pan from refrigerator and let come closer to room temperature as oven heats
3. Brush with 1 egg beaten
4. Bake in over 25-30 minutes until golden brown
5. Remove pan from oven and let the pan cool slightly on roasting rack
6. While pan cools make the icing, mix butter and cream cheese in large size mixing bowl until combined
7. Add powdered sugar and mix in slowly until incorporated, about 5 minutes
8. Add vanilla and lemon juice until fully mixed
9. Once the rolls have slightly cooled spread icing on top and
serve warm